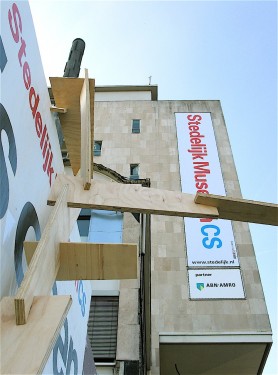 The Transforms, composed out of trapezium shaped building modules, are named that way because of the fact that the intersection of lines, where one process is converted or transformed into another process (see figure).

right
Characteristic for the Transforms is that they are removable and again can be ‘transformed’ into new forms.
Inspired by graffiti and timber structures at construction-sites Theo Haring began after graduating from the Academi  in Amsterdam in 1987,  placing his sculptures  in public areas of cities.
The Transforms read like a 3-D Tag, a removable 3-dimensional graffiti.
The constructive imagery refers in particular to the dynamics of all kinds of transformations, especially of the urban environment, which constantly renews itself.
The transforms build up of ‘building modules’, refer to the structure of both organic and architectural structures.
The concept is also influenced by ‘The Stijl’ especially the work of Mondrian and Rietveld, chinese characters, zenboedisme and Taoism.
‘When we study all forms, then we find nowhere something unchanging, but rather that everything is constantly changing’. - Goethe